St Peter in chains is not only an important Basilica in Rome, but also the Faculty of Engineering at Sapienza University of Rome. The monastery of San Lorenzo in Panisperna, was situated in San Pietro in Vicoli church (425-455) which Eudoxia, wife of Emperor Valentinian III, built to house the relic of the chains that bound San Peter when he was imprisoned in Jerusalem. The night before St. Peter’s trial he has been released from the chain by an angel. Eudoxia gifted the chains to Pope Leo I and while he compared them to the chains of St. Peter’s imprisonment in the Mamertine Prison in Rome, the two chains miraculously fused together.

Monks’ house was built around the Italian Renaissance cloister by Giuliano Sangallo next to the church. In the middle of the cloister there is an octagonal well. After 1870 the school of Engineering was located in the Monastery. Today there are still many departments and the well is the symbol of the faculty.

The Basilica of St Peter in chains, houses the chains in a reliquary under the main altar but also the beautiful Michelangelo’s Moses statue. This statue is a part of the tomb of Giuliano della Rovere who, in 1503, became pope Julius II. In 1505 he asked Michelangelo to come to Rome and to work on his tomb. The original project had forty statues but in the meantime Michelangelo was called to paint the ceiling of the Sistine Chapel. Then after Julius’ death his successors commissioned Michelangelo with other tasks (they were not interested in a tomb of one of their predecessors) so that he could spend only few time on it. When Michelangelo died only the statues of Moses, Leah, Rachel and two dying slaves were completed. The statue of Julius would have been in the center of the composition  but it is now the statue of Moses that takes the central position. People say that he was so impressed by his work  that he struck with a hammer  the right knee of the statue commanding, “now speak!”. 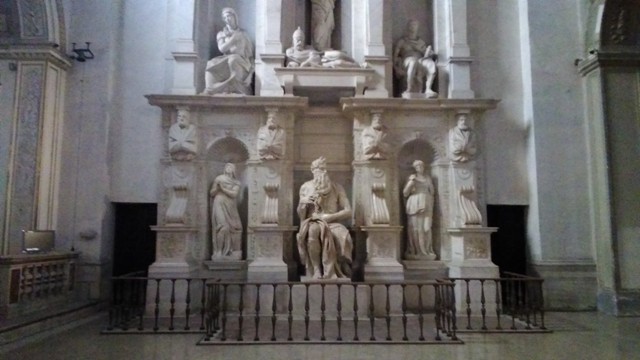 The Basilica and the Faculty are in Via Eudossiana. You can reach them taking the underground B line to Laurentina and stopping at Cavour stop or Colosseum stop.