William Kentridge realized the largest work of street art in the world and it is in Rome. It is a very particular frieze indeed and it has been drawn on the embankment of the Tiber river between Ponte Sisto and Ponte Mazzini. The South-African artist didn’t use paint but he erased the biological patina on the travertine. So we can say that the work has a sort of deadline because it will be covered again by the natural biological patina in five years or less if you consider the great pollution in Rome. 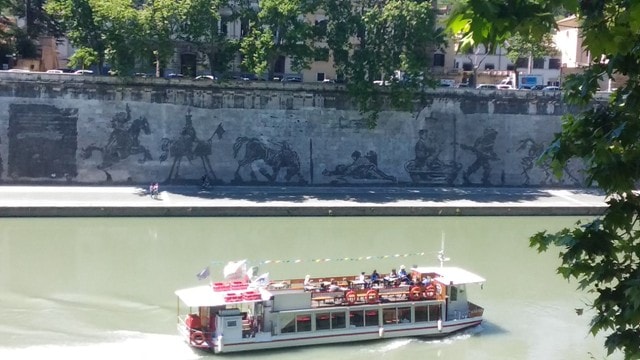 The large-scale 500 meter-long frieze named “Triumphs and Laments” tells Rome’s greatest victories and defeats. Kentridge represents figures, up to 10 meters high, to show honours  and shames in the history of the Eternal City. You can see Julius Caesar and the Roman Empire, Fontana di Trevi allegory with Marcello Mastroianni and Anita Eckberg, the corpse of Aldo Moro in the car, Mussolini on horseback, Pier Paolo Pasolini death, the ecstasy of St. Theresa by Bernini, the triumph of the Church, the bombardment on Rome durind the war, etc. So if you are on Lungotevere Tebaldi look at the other side of the river to see this particular work but hurry up because it will disappear.